This is a Grid Based Movement tutorial it will be created into a video soon enough. Hope you guys like it.

Grid-Based systems are common in retro and many newer indie games in this post we will go through creating a script that does just that and then we will try to understand the steps involved in it.

Requirements For This Tutorial

As of writing this tutorial I don’t expect any previous knowledge of Godot or Programming or Maths. Probably basic maths. Nothing above middle school.

Who is this tutorial for:

Anyone who wants to learn to code the more experienced can also get a few take-aways. So it is for people with lesser programming or Godot experience than a probably intermediate level user.

Not uploaded yet. Will be uploaded with the video tutorial.

For this we will be using of a lerp function, to move the player by directly modifying the value of position.

In a grid each block is fixed distance from the ones adjacent/having a side common to it, if not atleast it follows a pattern which makes movement in a grid pridictable.

So each movement to left is a movement by x. 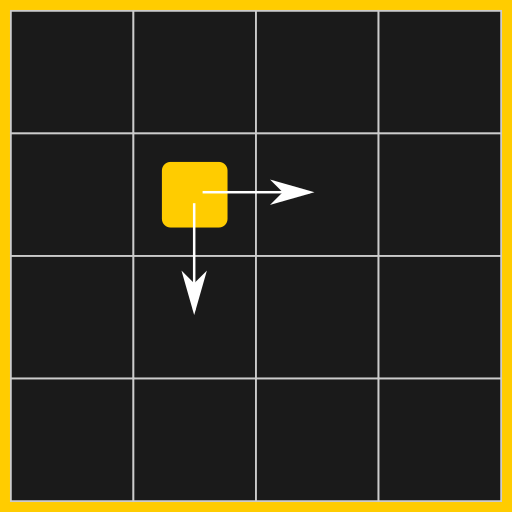 And in a grid the most common movement is 4 way over the regular 8 way movement. And in case of analog stick the movement can even be infinite but here we are not going to be using analog.

In the code target position is the position on the grid that we have to move created using the tileSize that you input.

You see that I use a fourth variable d to store time which when equal to or greater than 1 will be reset to 0. That means 1 second divided by speed will be the time in which the movement is complete which allows for creating movement as per real world time.

You can even use different tileSizes for x and y axis but that is not required. This will allow you to create grids with rectangles rather than squares, it’s silly but possible. It can be implemented like,

Then we check and see if the target is reached then we can again take input and start moving. Voila!

And my last trick is simple really but if you are a beginner at programming try to understand and put your explaination in the comments section. It will help you understand code from more advanced levels to try to think more. I will message you the right answer or tell you if you are write will be fun.

And if you are more advanced and you have problems understanding the code. Then seriously put something in the comments we need to talk.

In the end we realize that it was quite simple to create grid-based movement and even simpler to modify it upto our needs from a square to rectangle. And also with 8 direction motion implementation., that follows the grid.

The tutorial will be uploaded once the newer input strength features are available in an alpha build atleast until then this is the best and most reliable way.

If you have any problems or want to share feedback or just have any questions you feel like asking use the comments section below.